This is a total OMG moment when I heard the news on TV today, Finally, Celine Dion’s much awaited concert here in the Philippines is pushing through after it was cancelled last year. The world-renowned singer is set to perform live in Manila on July 19 at the Mall of Asia Arena and I will not be surprised if the tickets sale will run out fast. 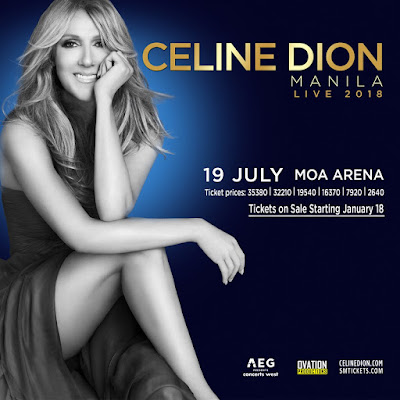 My fan girl heart is gushing over it, I couldn’t contain the excitement and as early as now, I am day dreaming I am seating right in front of her, listening to her while she sings her iconic songs. More than being the legendary singer of Titanic’s movie theme song, Celine Dion’s ‘I Love You Goodbye‘ has become the go-to-song of the broken-hearted souls, and that includes me? Haha I don’t know but the song is just right everything about the ‘feels‘.  And I guess all her songs indeed made a big impact to a lot of people’s lives whether inlove or out of love.  I think I want to thank her too just now for I was able to bounce back immediately from being misserable when I experience those so called heart-aches when I was stil a kid at heart. Because now I realize  a lot of jokes happen during your your childhood and somehow, there’s a Celine Dion who will make you wait for your own forever in time, through her songs...ansabeh??!


Going back to her concert here in Manila, I think it could only be just a dream for now *insert crying emoticons*.  Although I still have time to save up for a ticket on her concert, just in case it will not be sold out yet, I felt a bit sad because I don’t think I could squeeze it in my financial priorities at the moment. I need a strong courage not to be swayed really.  I checked the prices of the tickets online and I could only just shake my head haha. Anyway, I’m pretty sure it’s not going to be the last time she will visit the country. Once she experience the Filipino audience’s warm reception, there will always be a reason for her to come back. By then, I cannot let the opportunity pass to see her and watch her perform live, then probably I could die already after, joke!!

Anyways, I am sharing a few details here about her upcoming concert. Please read on J

World-renowned singer Celine Dion is set to perform across the Asia Pacific region with her highly anticipated 2018 live series of shows.  CELINE DION LIVE 2018 Tour will kick off on June 26 at Tokyo, Japan. Next in line will be in Macau and the cities she will perform in for the first time ever including Singapore, Jakarta, Taipei, Bangkok and finally in Manila on July 19 at the MOA Arena.
Tickets for CELINE DION LIVE 2018 in Manila will go on sale to the public beginning 18 January at 10 a.m. Members of TeamCeline will have access to purchase tickets before the public through an advance pre-sale from 16 January to 17 January. The tour is produced by AEG Presents and co-produced by Ovation Productions in Manila.
Tickets for CELINE DION LIVE 2018 Tour in Manila will go on-sale to the public beginning 18 January. For tickets and information visit celinedion.com and smtickets.com.
One of the most immediately recognized, widely respected and successful performers in pop music history, Celine has sold almost 250 million albums during her over 30-year career. She has earned five Grammy Awards, two Academy Awards and seven American Music Awards.  In 2004, Celine received the Diamond award at the World Music Awards recognizing her status as the best-selling female artist of all time. In 2016, the Billboard Music Awards presented her with the lifetime achievement Icon Award.   Celine continues to break records with her ongoing Las Vegas residency at The Colosseum at Caesars Palace which has played over 1,000 shows to more than four million fans.

AEG Presents is one of the largest live music companies in the world.  The company is dedicated to all aspects of live contemporary music performances, including producing and promoting global and regional concert tours, music events and world-renowned festivals.  AEG Presents promotes more than 8,000 shows annually worldwide.  For more information, visit aegpresents.com.

Ovation Productions is a pioneer concert promotions company in the Philippines operating since the 1970s headed by veteran promoter Renen de Guia. It directly buys, promotes, and handles all production of its concerts ‘in-house’. The company has expanded the concert market for international artists by breaking into and developing provincial cities in the Philippines aside from Metro Manila. For more information, visitovationproductionsmanila.com.
Email ThisBlogThis!Share to TwitterShare to FacebookShare to Pinterest