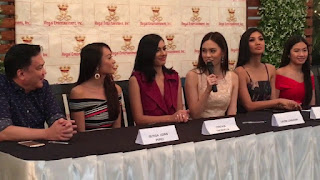 Mother Lily's production signed up a bunch of beauty queens, all grand winners of the recently concluded Miss World Philippines. The group is led by Miss World-Philippines Laura Victoria Lehmann, who used to be a UAAP courtside reporter before she joined the beauty pageant.

Meanwhile, Regal's next offering, "This Time I'll Be Sweeter," the grand movie of today's hottest loveteam of Barbie Forteza and Ken Chan, opens in cinemas nationwide on Nov. 8 under the direction of Joel Lamangan.

Check out the social media accounts of Regal Films via @regalentertainmentinc on facebook @regalfilms50 on Instagram for more updates.
Email ThisBlogThis!Share to TwitterShare to FacebookShare to Pinterest