5 Competencies to look for in a Philippine President 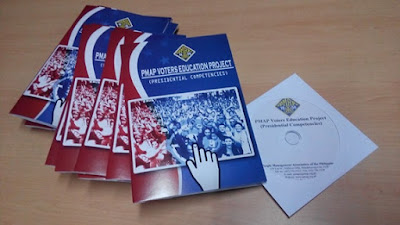 In the world of human resources, recruiters go through a tedious process of selecting the right people for a certain job. They do not just select the best person based on what is written in their resumes, but rather, they also look into the competencies.

Competencies are the knowledge, skills, abilities and motivations needed in order for a person to succeed in a job and absence of these may lead to failure.

If you think that competencies have nothing to do with electing the Philippine president, think again.

The People Management Association of the Philippines (PMAP), in partnership with one its member companies SGV-Development Dimensions International (DDI), conducted a research and identified five (5) presidential competencies required for the job of the Philippine president. This was envisioned to help strengthen the democratic process in the country and help voters make a better decision in choosing a candidate who is most competent and capable of accomplishing the duties and responsibilities of the president effectively.
At the end of the research process, PMAP and DDI identified the following competencies: Navigator, Mobilizer, Inspiring Leader, Servant Leader, and Guardian of National Wealth, Patrimony, and Law and Order.
1. Navigator

A navigator is defined as someone who can steer the ship of state to arrive at the “destination” of a just and human society. This also means that the president must be able to properly address the root causes of poverty and other social problems, identify opportunities and solve problems, discern and prioritize among conflicting interests with the common good in mind, and effectively address crisis situations in order to minimize disruptions. With this, the president must have good analytical skills, judgment, decisiveness, tolerance for ambiguity and visionary leadership.

This role becomes important because the president normally makes the final decision in terms of the initiation of government policies. Because of this, the president really needs to have a firm understanding of the complex issues in the Philippines and provide a clear vision of where to go and how to go there.

As a mobilizer, the president leads the executive department and proactively builds alliances with concerned sectors to achieve objectives and build consensus. He must be able to get the support of various interest groups to get key initiatives implemented. He works well with other people – his cabinet, different political parties, NGOs, and other interest groups. He should also be able to attract the best people to work for the government.

The president must serve the people with a genuinely caring heart and must work hard and well to achieve the goals of the government. A servant leader strives to serve the interests of the Filipino people rather than his own personal interests. He does his best to reach out to all sectors. He values humility and integrity. Aside from this, he has good work ethics and strives to learn continuously despite holding the highest position in the Philippine Government.

An inspiring leader can build unity, trust and optimism among the people instead of making them cynical about the country or their leader. He is also able to empathize with the ordinary Filipino, knowing what they through and what they aspire to become. He also has a vision for the country and conveys this to the people and gets them on board to achieve this. Aside from this, he is a man of his words.

5. Guardian of National Wealth, Patrimony, and Law and Order

The president must ensure that the national wealth and resources are used properly. He upholds the law in all his doings and sets a good example for all the other government officials. He also should not tolerate graft and corruption in the government and displays courage in making unpopular decisions as long as they are for the common good. The president must have a goal of a peaceful country for all Filipinos.

PMAP, as the premiere human resources management association in the country, is a strong advocate of leadership and good people management in government and believes that the choice of President is critical to the nation’s continued progress.

Through its Presidential Competencies project this year, PMAP lends its expertise to help voters make more informed choices through a voters education handbook that will be distributed to its more than 1,800 member companies and individual members, 25 PMAP chapters and 86 Junior PMAP member schools all over the country. From this network alone, counting the member company employees, member students, and their family and friends, PMAP has the potential reach of 14 Million Filipinos.

As a democratic country, the choice of the next leaders lies in the hands of the Filipino people. Because of this, it is very important for all citizens to make a well-evaluated vote in order to have the best leaders the country deserves.

For more information, please contact the PMAP Secretariat at tel. no. 726-1532 or email pmap@pmap.org.ph. Want to get updates from the premier organization of HR practitioners and people managers in the country? Visit www.pmap.org.ph or “Like” www.facebook.com/PMAP1956.
Email ThisBlogThis!Share to TwitterShare to FacebookShare to Pinterest