Sisterakas movie: Not a LOL-worthy one for me


I wanted to be as objective as possible about my thoughts on this movie. My family got 3 choices for a PG-13 film among the MMFF entries but since Sisterakas is the nearest to start, we opted to go. The movie is overrated for me.  Well aside from the fact that it probably has the biggest budget for the lead actors having AiAi Delas Alas, Kris Aquino and Vice Ganda in one movie, it was overrated for me in a sense that it won 3rd Best Picture and made Wilma Doesn't won for the Best Supporting Actress award.  That two recognitions is my only concern, why oh why? 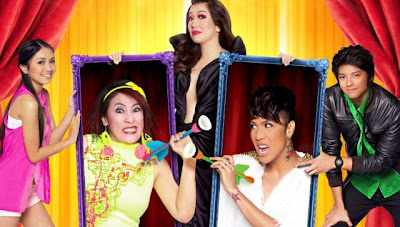 I am yet to see Thy Womb and according to a lot of reviews, the film deserves to be in the roster of the top 3 Best Picture awards, we'll see if Brillantes' indeed got robbed of this highest recognition in MMFF. The Best Supporting Actress award for someone who uttered very few lines, threw punch lines that didn't even had marks in my memory, what was that? I have nothing against Wilma Doesnt  but for whatever's sake, she's not deserving.

Sisterakas casted two of highly acclaimed comedy actors of today thus I have very high expectations, sad that it fell short. Vice Ganda's lines are still funny but all are predictable for me because I get to watch him almost everyday in his noon time show so it’s not new to me anymore.  I've also seen a lot of his comedy styles in this movie from his previous film "Petrang Kabayo" which made me doubt if Vice is already running out of ideas that he didn't notice the way his character is presented in this movie has similarity from his debut movie? I knew he could have spice up his role in a more different style.

In terms of attendance, the movie house is actually still full with a few people standing and some sitting in the stairs, the mass appeal of Sisterakas is indeed worth the production cost I must say. But a few disappointments I heard from the viewers made my thoughts validated.  Some who brought a bunch of kids are quite mad because most of the comedy lines are unfortunately not making any sense to the young viewers.  I have the same sentiments because I brought my 4 year old kid who only took a little of his time to watch the movie and later on just concentrated on buckets of cheese popcorn we bought, that part at least made him happy for this movie trip.

Ai-Ai Delas Alas saves my 20% of giving this film a "happy-Me" verdict after watching it, and I’m thankful she became part of this movie when she wasn't even part of the original casts as reported before. With Kris Aquino's role and acting, nice try but not really her forte. I love her and always fond of watching her doing hosting routines in her morning show and I must say she must stick to what she does best :).

I've yet to watch 4 more films before the MMFF is over, I hope the other two Star Cinema entries I'm going to see will compensate my disappointments over Sisterakas.  Still, congratulations to Star Cinema for the blockbuster success.
Email ThisBlogThis!Share to TwitterShare to FacebookShare to Pinterest