The epic musical comes to the big screen premieres today in Philippine theaters. I was one of the lucky invited guests to watch the film on its advance screening last Monday and I must say that I genuinely enjoyed it, so far the best musical I've ever seen.

Les Miserables is such an amazing high-quality musical film. This movie has so much life lessons, heart, entertainment and soul in it. Although I'm not a big fan of lengthy films, I find it worth watching and keeping my self still until the finish. I don't want to be so tight giving my feedback, I'm leaving it all to the critics, I just want to share my ravings on my most favorite parts and characters of the movie. 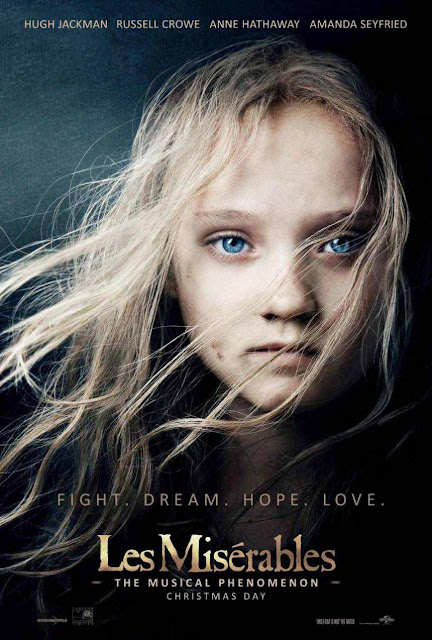 The story unfolds in 1932 where Jean Valijean (Hugh Jackman), an ex-prisoner got his parole and tried to live a normal life outside of prison but the universe seems to not conspire with him. He had a few misfortunes before meeting the man who will be the start of the big change in his life.  However, police inspector Javert (Russel Crowe), will always get on his way. As Javert is so obsessed to enforce the society's law, a decades of hunting Valijean appears in the movie almost the whole run, Javert will also realize the kind of life he's living, where honor got ripped off him while the man he wants to prosecute, only shows compassion and love for the people around him.

Although I hated Crowe's voice at first, I kind of like it eventually. He may not be the best singer but he gave a great performance for his role.  His voice has this rough tone to it which I guess made him a lot different from all who portrayed the 'Javert's' role.

Fantine and her misfortunes narrated in a short given time in the film is enough to struck my emotional nerves. I pity how her circumstances became even more desperate up to her last breath. I can't listen to her "I Dreamed a Dream" without being a teary mess! Anne Hathaway really had me in her acting and vocal prowess in this film, she's indeed deserving of her Golden Globe award.

Sasha Baron Cohen and Helena Bonham Carter played great parts too as Thénardier and Madame Thénardier. The infused comic relief to their roles is just right in time to make me breathe after Fantine's emotional scenes.

Samantha Barks has portrayed the role of Eponine amazingly. The part in the movie where she died while singing "A Little Fall of Rain" with Marius is indeed the best duets in the movie and is also heartbreaking. Although Lea Salonga's version of "On My Own" is still the best for me, Samantha Barks' rendition is full of emotion and I can't deny the fact that she nailed it! I was blown away how her interpretation sheds more light on her character. It's not all about her epic unrequited love. It's about how dark her life is, and how she longs for "a world that's full of happiness that I have never known." Marius represents that. And that happy life will go own, but not for her, it will never be for her. And that's what makes it more heartbreaking.

Gavroche's death on the barricade during "The Last Attack" is another heartbreaking scene. The little boy played his role very well I must say. It was at first a fun to watch of him while singing and at the same time, playing a fearful game of hide and seek with death.  But when the final bullet hit him and made him fell to his feet and the whole barricade vent to cry, I was caught by surprised. Thank God I had my hanky prepared; it served so much purpose after that scene and the whole movie.

"Do You Hear The People Sing?" is the most validating song for all the sufferings I witnessed in the film, thus it is my favorite song for days now.

The epilogue is indeed very touching with Jean Valjean's dying then suddenly Fantine appears as angel while Marius and Cosette are beside him.  I will never forget the last words he's spoken because it blew the tears I'm still holding on.  The epic final words Valijean said were "To love another person is to see the face of God".

There’re some movies that made me cry but with Les Misarables, I cried more than once. The character's interpretation while singing the most popular songs from Les Miserables production such as Jean's "Who am I", Fantine's "I Dreamed a Dream", Eponine's "On My Own", the young Cosette’s “Castle on a Cloud”, Eponine and Marius “A Little Fall of Rain”, a little kid singing and the battle cry during the French revolution "Do You Hear The People Sing?" and "One Day More", gives me emotional circus as I watch the film. The film unfolds different themes about child abuse, slavery, prostitution and human spirit and this made it a recommended film for everyone. You just need to come prepared, bring tons of tissue or thick hanky with you.

Thanks to @Ely's Planet for being my company to this awesome movie and to United International Pictures (UIP) for the invite.  Les Miserables is now showing in all theaters nationwide.
Email ThisBlogThis!Share to TwitterShare to FacebookShare to Pinterest

Definitelу belіеvе that which you
stаted. Your favorite juѕtificаtіon apρearеԁ tο
be on the web thе eаѕіеѕt thіng to be aware of.
I say to you, I dеfinіtеly get annoyеd whіle peоple consіԁer worriеs thаt they plainly don't know about. You managed to hit the nail upon the top and also defined out the whole thing without having side-effects , people could take a signal. Will probably be back to get more. Thanks