Have a dose of sosyness and good laugh with Sosy Problems

Sosy Problems is GMA Films' entry to the 2012 MMFF which stars four of the 'It' girls from the kapuso camp - Heart Evangelista, Solenn Heusaff, Bianca King and Rhian Ramos. The film is entertaining for me; I laughed my heart out to most of the scenes (where some may smirks because it may appear quite shallow for them). I must say the girls got me with their 'kaartehan' ensembled with the 'kasosyalan’ but still with a heart. The film is not done to actually accentuate the ‘sosy life’ of the lead characters but more so, to take a peak in their lives as they too got their own problems. 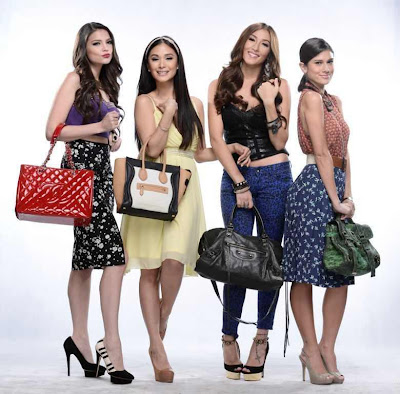 Before the film started, I never really expected anything to wow me big, I just want to enjoy watching it together with my blogger friends.  I was surprised because from the start of the movie through the credits, I had enough dose of laugh to end a tiring day and sleep feeling tacky and sosy, and that really feels good.

The movie talks about different problems encountered by these girls and how they deal with it. Some of the characters are patterned on some real life personalities.  Although I don't expect the film to come close to the top 3 grossing films in the MMFF, but performance wise, the four girls did great! But I have my two favorites, Rhian Ramos and Heart Evangelista because the two are effortless in their acting; they spell class in every way and in a funny way too. And of course, Rhian and Heart are two with the most beautiful faces in showbiz I must say, their acting prowess in this film is convincing they got the roles fitted for them.

Two of my favorite scenes, one is in the first part of the film, the scene when the girls went up against Bernice (the new owner/COO) of Polo Club. To show their opposition, they formed a barricade and gathered as many members they could including their families, office employees, drivers and yayas to cheer out loud in unison "No to Yaya mall, Yes to Polo Club" planking style. It was indeed the laughable part for me :)

The second is during the latter part when they're actually planning how to get their favorite hang-out place out of Bernice's hand before she can have it transformed to a "Yaya mall" as they call it. The girls amidst the serious planning felt giddy and overjoyed at the sight of a popped up artwork of designer bags in every page of a photo album. Shallow but a real funny scene :).

Mylene Dizon is also a revelation in her comedic role as "Bernice", you must watch to see how she goes head to head with the sosy girls. Cherrie Gil is no question good in her role, her French/Spanish speaking in the movie just added more class to the way she already is. Agot Isidro is also good playing in a rival role with Cherrie Gil.

Sosy Problems promises a one and a half hour of fun, I can't really say it's for everyone to like but I also doubted my self at first but ended up enjoying it!

Directed by Andoy Ranay and produced by GMA Films, watch na for “Sosy Problems” in cinemas nationwide.
Email ThisBlogThis!Share to TwitterShare to FacebookShare to Pinterest