Ear Candling is the first of my two-part pampering series at Elite Nails Spa this week. I've heard of this procedure before but I was reluctant to try. I'm actually not comfortable with the idea of inserting any objects except from the cotton buds I got used to, inside my ears. But when Elite Nails Spa owner, Joie, offered me to try their Ear Candling service, after confirming from their staff if the procedure doesn't really hurt, I decided to give it a try.

The procedure, they said would often last up to 15 minutes per ear. We got started, the preparation of things needed are just short, I saw they had a paper plate with a hole in the middle, a cone-shaped paper wax or probably a linen but the texture feels hard because of the wax maybe, a lighter, water and oil.
I was asked to lie on my side then the candle (paper wax) is then inserted in the paper hole and placed on top of my ear. Make sure that the bottom end of the candle is properly positioned in the ear canal opening since the staff won’t be able to determine it, it may hurt the customer if they push hard. See below photo for illustration (right middle), then the other staff lit the top end of the wax to begin. 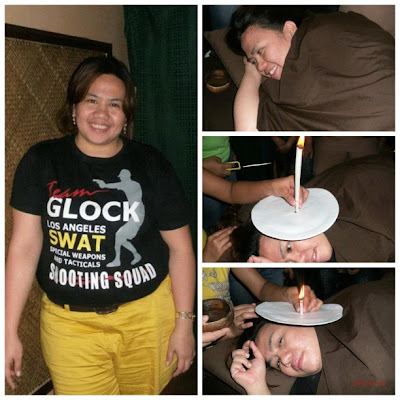 The lit candle creates pressure that aids to extract earwax and other residues inside my ears, I remember it felt a little bit itchy and that's all, nothing that will make you really uncomfortable during the procedure. In less than 15 minutes, my first ear is done. I think they put a few drops of oil to clean the outer of my ear before proceeding to the other ear. The same procedure is applied and when done, a staff gave my head a short massage and it actually feels good after the Ear Candling procedure.
My Over all rating is 9/10 only because of the itching that I felt during the procedure haha. But I think Ear Candling is a great alternative if you really want to release the residues accumulated in our precious ears for months because the regular cleaning using the swabs and cotton buds doesn't really clean them completely. I am also worried of using the 'spoon-like' ear stick.
Ear Candling, as I've read from an online article relieves sinus pressure and pain, improves hearing, relieves earaches and cures a swimmer's ears and other infections among others. Some may claim it's not medically proven yet to have caused the above mentioned benefits but I can say that it's safe to try but of course, don't try to do it by your self or even try doing it for someone or to your kids.
Don't risk, it is always best going to those who have enough knowledge and experience to perform the procedure. I was safe at the hands of Elite Nails' staff; they also value confidentiality of any procedures they perform to their clients :). That's it for this post; I hope you can also give a thought about ear candling. Will you be interested to try it too?
Email ThisBlogThis!Share to TwitterShare to FacebookShare to Pinterest

wow! this cool! wish to try this one anytime this week. Thanks for posting! BTW, is it across the BDO in Kapasigan? Thanks!

This is a comprehensive review, and I'd have to say that this is the first ear candling post that I've read from start to finish. Hehehe! I have never tried ear candling before. But I think I'll benefit from this if this would really improve hearing.

Hi Jules! Yes, you're correct! This is the first o rather the main branch.

Thanks for your commen Ms. Swexy, I suggest that you also try ear candling too, it's safe and fun too :)

interesting! i want to try it! i want to know if it really improves hearing. hihi..

Hey Che, I believe so, if I have to base it in listening to my MP3 when I don't normally lower the headset volume beyond the usual level, para kase ngayon nabibingi ako sa normal volume pa lang :)