"CORAZON: ANG UNANG ASWANG" is Scary and Beautifully made

I’m no fan of horror films because I don’t like spending sleepless nights for the next three days or more after watching a movie. Although some of the movies I’ve seen in the past didn’t actually give me cold sweat after, I still don’t like the idea of choosing a horror movie as priority over other films to watch in a big screen, whether I’m accompanied by small or bigger group of friends. I easily chicken out, that’s it. 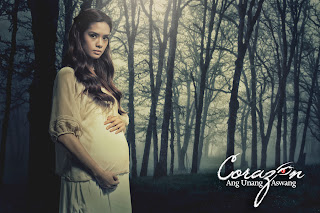 TV actress Erich Gonzales is coming up with a horror movie where she plays the title role in “Corazon: Ang Unang Aswang”.  At first, I can’t rate whether this movie will be a big hit since the previous film presented by ABS-CBN film outfit, Star Cinema's “Unofficially Yours” is indeed a blockbuster hit. Big pressure is actually on for Erich and Derek Ramsay (who plays role of Corazon's husband in the movie) and newbie director Richard Somes. As the presscon goes on, questions were raised by the press people discussing about a previous indie horror film which was also directed by Somes, from there, I got note of the director's strength to do a challenging movie like Corazon. 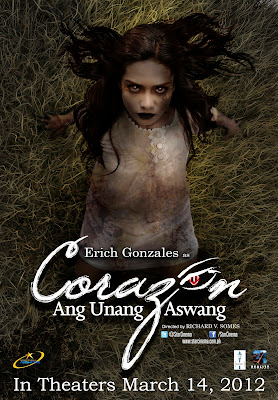 The trailer of “Corazon: Ang Unang Aswang” is impressive for me in a sense that it was able to put my scary meter on a high after quite sometimes. Listening to director Richard, the film was shot in Baras, Rizal which really caught my interest because I’ve been to the place and I can say that Baras town can deliver an ideal setting for any horror film.

“Corazon: Ang Unang Aswang” is a must-watch. I personally believed the hard work of the freshman director and actors Gonzales and Ramsay matches the current thirst of the Filipino movie goers these days to see quality films whether one is big-budgeted or not. It’s the craft of an experienced individual who decided to put all his genuine ideas in a film and offer it to the public. I would also like to commend Erich Gonzales as I’ve seen in the trailer of this movie a different character that I used to see in TV portraying the usual drama roles.  I guess whether this movie take on a high or not, Erich’s performance is worth an award and recognitions.
Mark the scariest date of the year in your calendar – March 14, “Corazon: Ang Unang Aswang”, showing in all theaters nationwide.


Read more on "Corazon: Ang Unang Aswang" here and view photos of the cast from the mothis album.

This is the trailer I’m talking about which almost gave me anxieties after watching :).
Email ThisBlogThis!Share to TwitterShare to FacebookShare to Pinterest