Now Showing: Won't Last A Day Without You :)

They were such a smahs-hit in Star cinema’s romance comedy “Catch Me I’m In Love,” so a follow-up is in order. The movie that brings Sarah and Gerald together again in a pre-Christmas offering of Star Cinema and Viva Flims, "Won't Last A Day Without You". 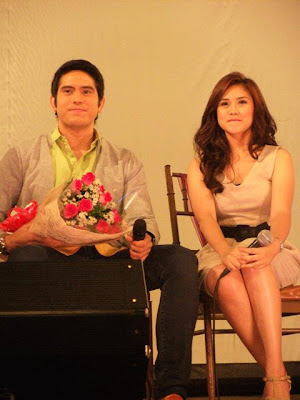 Although the public is well aware that Sarah Geronimo and Gerald Anderson are not an “item” in real life, the two stars are accepted as screen lovers because of the chemistry between them.  Added factors include a good, credible love story that is well-executed.
In “Catch Me I’m In Love”, Sarah and Gerald  were credible as sweethearts throwing mud at each other in a playful scene, he as a rich boy and she as a middleclass girl who love for each other knows no socio-economic boundaries.
Fans will ge more “kilig” moments in “Won’t Last A Day Without you,” their second team-up co-produced by Star Cineman and Viva Films.
Directed by Raz de la Torre, the movie also stars Joey de Leon and John “Sweet” Lapus.
If in “Catch Me I’m In Love” Sarah and Gerald were catching each other because they were falling in love, in “Won’t Last A Day Without You” they realize that they won’t last a day without each other after they meet and match under circumstances common only in storybooks.
Sarah plays deejay Heidee who dishes out pieces of advice to the lovesick and lovelorn.  Gerald plays Andrew, an easy-go-lucky playboy who treats girl as playthings.
Gerald find himself a “love victim” when he hears his “kalokohan” being broadcast nationwide on deejay Heidee’s program. First, they get into a verbal clash and then they realize that they are falling for each other, setting love not just “on the air” but in the air” around them.
The dilemma:  Who does and does an expert love adviser like dejay Heidee turn to when faced with a love problem?  And will the playboy love victim finally own up to his mistakes broadcast by the love adviser who ends up as the solution?
“Won’t Last  A Day Without You” is Star Cinema/Viva Films’ pre-Christmas offering opeing in 100 theater nationwide on Nov. 30. You are all invited to “tune in.
See More Photos from the movie press con here.


Synopsis:
So where, rather, who do you run to when you have love problems?  Is it to your parents, your siblings or your friends?  Not really.  You tune in to your favorite radio announcer, tell him/her your predicament and ask for pieces of advice.
Otherwise, you listen to the dictates of your heart.  In “Won’t Last A Day Without You,” another potential Blockbuster Star Cinema and Viva Films co-production, the characters played by Sarah Geronimo and Gerald Anderson Meet and match on the air.  Yes, it’s not so much love is “in the air” as love is “on the air”.
Sarah plays radio deejay Heidee who helps the lovesic and the lovelorn sort out their love problems, turn to when she falls hopelessly in love with the playboy who refuse to own up to his mistakes?
For answers, you don’t have to tun in to a love-advice radio program, simply watch “Won’t Last A Day Without You”.

Note: I haven't seen the movie yet, probably this weekend so I will post a follow-up blog, a review-like but not a hard-core one hehe. Stay-tuned :).
Email ThisBlogThis!Share to TwitterShare to FacebookShare to Pinterest