May you rest in peace Steve Jobs...

If you got work that has something to do with apple and mac products all years of your career life, today's news about Steve Jobs's death would probably not sink to your head easily, guess you could only utter.."No Way..???"

Just a few hours ago when I blog about how cool the new Apple iPhone 4S, I was shocked seeing posts and tweets in facebook and twitter that Steve Jobs, Apple's CEO, has passed away and this was confirmed if you go to Apple's web site, their home page is switched to a full-page image of Jobs with the text, "Steve Jobs 1955-2011." Clicking on the image revealed the additional text: "Apple has lost a visionary and creative genius, and the world has lost an amazing human being. Those of us who have been fortunate enough to know and work with Steve have lost a dear friend and an inspiring mentor. Steve leaves behind a company that only he could have built, and his spirit will forever be the foundation of Apple." 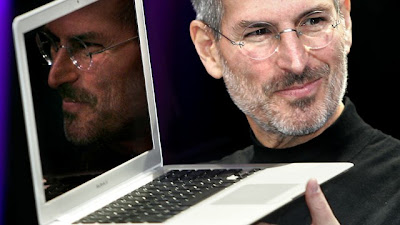 This is indeed a very sad news for the world. Steve Jobs is the man who not only changed the world with his amazing contributions to the technology...he has improved the lives of so many people. Who would know if there would be another man who is as genius as Jobs, I simply couldn't just imagine his loss and yes I am deeply affected. For those who may ask, my career has evolved to 10 years of being exposed to mostly apple/mac products and was privileged to have tried and owned some. My younger years were challenged to prove and defend every Mac products our company sell to customers, it was sometimes difficult but it was fulfilling. It was fun having the chance to test & use a mac, an iPod then because we got exclusive distributorship and we get our hands first on these amazing products before consumers can even buy them in the Philippines. I'm sure even people who have not experienced to use any apple or mac products know Steve Jobs and Apple as one.

Whatever walks we come from...the fact that can't be denied is that the world has lost one great man..

RIP Steve Jobs and Thank you!
Email ThisBlogThis!Share to TwitterShare to FacebookShare to Pinterest