Is your kid book crazy? 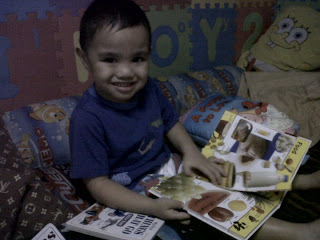 I started introducing my son to books when he was a few months old, four months if I remember.  Being a first-time Mom, I’ve no idea when is the best time to do it but my friend told me that it’s good to start early, reading him books or just letting him flip pages, just pay attention if he’s eating the books.
My friend lend me some pre-loved baby books since her son is a grown up so I started reading then to Robin. My baby’s interest to books is very evident as he immediately grabs the set of his first books and he tosses and turns them with his little hands. I grabbed him to my lap then I read while showing him full-color pictures in the pages, his eyes were glued as if he can already read.  This and some mouth spills are such a picture-perfect scene.
It became a regular habit to read him books at least 5 times a day for 3 consecutive months when I was on maternity leave. When I went back to work, I would still read to him at bed time and as much as possible on weekends. To my surprise, when he was 6 months old, whenever I’d say the name of an object in the book, his hand will go over and point to specific picture, wow! Since then, I started buying him books which I have enjoyed doing every pay day up to now. On every occasion, I would also ask from my friends and his grandparents for books as gift.
During his early age, I would specify for some board books or the fabric ones since books with soft pages don’t seem safe for babies at early age because they often put them to their mouth like some kind of teethers. Some friends would spoil me with soft-padded books when I go with them if I have specifications on books they need to buy, which is quite more expensive than regular books. I also spent for some musical books, I guess, I am more excited sometimes to flip the pages and hear the sounds than my kid haha. 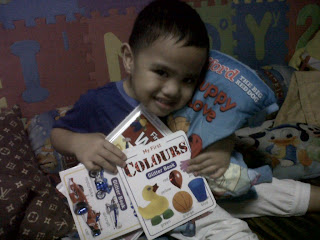 But really, I’ve seen a lot of amazing development when Robin became exposed to books. As early as six months, we can already recognizes his cooing and babbling when he wants something like saying “mama” and “papa” when he wants to be carried.  When he turned one, he can already converse with a lot of words. The vowels and vocabulary recognition were clearly understood even before he turned two and I can say it was a huge development since some kids of his age in our neighbors are quite behind his progress in communicating.
I think I owe this growth to my preference of exposing him to books early plus I shower him with a lot of stories to tell when my husband even told me not to overwhelm him. I insisted to be talking to him like our age and avoiding baby talks as much as I could but I still communicate with the sweetest endearment. I am proud that he is such a smart kid; the phase of his learning is really at par to kids 2-3 years ahead of him. And I’m glad that he continues to learn new things as his interest for books increases. He got some books where the story he memorizes already and read them to us, isn’t that amazing? While he listens to every story intently, my son can also do story-telling at the age of 3, I’m such a proud mom!
Here’s my son and some bookworming photos hehe 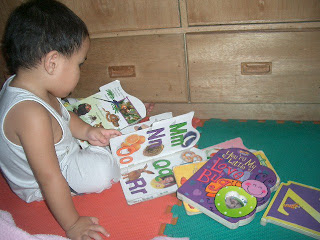 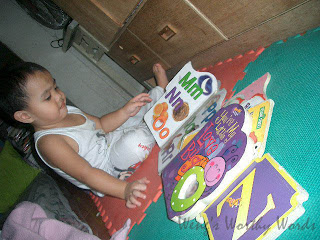 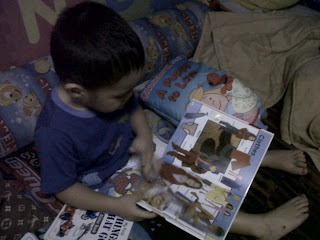 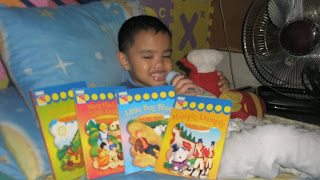